Aurus III is the latest Aurus series smartphone from Idea. Even though this is a budget Android-powered smartphone it features the recent Android 4.1 Jelly Bean OS. Like the earlier Aurus handsets, the Aurus III sports dual-SIM configuration one can access 3G networks while the other can be used for network. The new Idea Aurus III comes with MediaTek MT6575 chipset, 4-inch display, 1400 mAh battery and 4GB internal storage. The price of smartphone begins from Rs 4,999.

In terms of hardware, the new Idea Aurus III features a single core Cortex A9 processor clocked at 1 GHz and seated on a MediaTek MT6575 mobile chipset. This is mated to 512 MB RAM. Talking about software, the device boots on an Android 4.1 Jelly Bean OS to ensure smooth operations with occasional yet minimal hiccups.

In the optics department, it features a 5-MegaPixel shooter, while it sports a 0.3-megapixel shooter at the front. Rear shooter can deliver fair pictures for a handset in its price band without the LED flash. Location-based services get limited choices for quicker and more precise location locking.

The design quality of the Aurus III is quite better and rich looking handset than its older siblings thanks to the Chrome metal rim provided at the sides. This Android smartphone is available in two colour variants  - pure white and black. The other thing that will impress you is its TFT display and its clarity. It has a 4-inch display which comes with 480x800 pixel resolution. This resolution outputs a pixel density of 233 ppi , which is a very nice aspect of a sub-7K handset. The subtle arrangement of colours makes the Aurus III display look decently crisp and adequate to read text for more hours. The handset is armed with capacitive buttons on the display. However, on a white handset, they are hardly visible. The Idea Aurus III is a 3G smartphone and mobile users can always exploit the Wi-Fi (802.11 b/g/n) support excellently to access web. This latest Aurus handset comes packed with Stereo FM radio.

On the storage ground, you get 4 GB of internal memory space in this Idea Aurus handset for storing apps, images, songs, videos, and presentations. If you are running short of storage space, this can be further upgraded up to 32 GB using a microSD card.

To address the energy needs, Idea has provided a Li-ion 1400 mAh unit inside this dual SIM gadget and it ideally can give talk time of at least around 6 hours.

With Aurus III, Idea continues its practice of manufacturing good Android phones at an affordable cost. With its latest operating system, a more than able processor and camera, the Aurus III is a must buy handset, if you are scouting for a decent featured smartphone at a pocket-friendly price.

Idea Aurus III full specs and reviews as of Dec 2022. Buy it here! 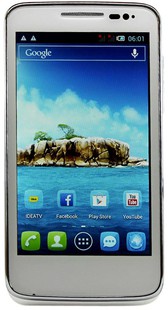