iBall electronics started manufacturing phones a while ago and is into the production of  feature phones, smartphones, and tablets. Known for making budget-friendly devices, the company released its Andi4 range. The iBall Andi4 B20 is one such cost-effective device in this range.

The B20 offers a very fancy and compact design and is quite inexpensive. The device fulfills all the entry-level requirements of an Android device and offers a decent processor on the way. This device is apt for people who are looking for a smartphone but at a very low budget. The device gives a taste of an Android smartphone and performs all the  basic functions with ease.

Digging into the features, the device supports a 4-inch TFT screen at a screen resolution of 480 x 800 pixels, delivering a decent visual experience. The phone offers a multi-touch screen for improved functionality.

The device commences on a 1 GHz Single-core processor coupled with 256MB RAM. The B20 boots on Android 4.4 KitKat. The configuration ends up being below average and can perform basic functions smoothly. But, multitasking becomes a huge task to conquer.

The device houses internal memory of 512MB that can be expanded further up to 32GB via a microSD card. The storage capacity on the device is not so great but according to the price range, it’s apt.

As far as the primary camera is concerned which is a good 2MP camera the device captures good quality pictures. But, the secondary snapper is a below average 0.3MP lens for selfies and video calling.

The dual-SIM device is powered by a minimal 1250mAh Li-ion battery, that offers ample talk time but a nominal standby time duration.

Talking about the connectivity of the device it renders a variety of options including Bluetooth, Wi-Fi, and HotSpot among others. 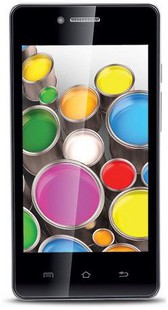