HTC Corporation is a leading consumer electronics manufacturer headquartered in Taiwan. The HTC U Play, a mid-range phone is the latest addition to the impressive product portfolio of  HTC. The HTC U Play price in India starts from INR 29,990. The U Play features a number of strong core specifications.

Does not support OTG

Under the hood, the HTC smartphone features an Octa-core Kryo processor which is clocked a speed of 1.8GHz. This set of Octa-core processor is seated on the latest chipset of MediaTek MT 6755 Helio P10.This is further supported by a good 4GB RAM to power your handset through the high-end gaming and heavy multitasking that you enjoy. Besides, the  Mali-T860MP2 graphics engine manages all the graphical needs and entertainment on the handset. In terms of software, the U Play boots on the Android Nougat 7.0 Operating system with Sense Touch User interface on top.

In the optics department, the HTC U Play presents an awesome 16MP primary shooter that can process pictures of 4,128 x 3,096 pixels resolution with the support of  Touch Focus, face detection, HDR, Panorama, Geo-Tagging etc. The rear camera is used to take good pictures and will be appreciated by camera lovers.The camera features LED flash for low-light situations, PDAF option for almost instant Photo snap, and is capable of shooting in FHD and HD. The 16MP front-facing shooter too serves as a nice option for snapping selfies and conducting high-quality video calling.

The HTC U Play features a 5.2-inch TFT Multi-touch Capacitive screen that sports full HD resolution. The screen resolution of 1080 x 1920 pixels results in a pixel density of 424 pixels per inch. The capacitive touch screen is interactive and responds fantastically to multi-touch.The Android phone’s display is not equipped with scratch resistant protection.

On the storage ground, this latest Android phone from HTC  features a native storage of 64GB. This is further expandable with the help of a microSD card,  up to a massive 256GB. You have the option to store various files such songs, videos, presentations, and apps and space will never be a constraint. Thanks to the expandable memory.

The U Play is driven by a 2,500mAh Li-Ion battery that functions for less than twenty hours. However, it can quickly be refuelled thanks to the Quick Charge feature that the chipset is armed with. Due to quick charging option, one doesn’t  need to worry about battery drain issues.

The HTC U Play is one more powerful Android phone from the  HTC Corporation, which has been very liberal in providing the Indian Android smartphone market with a wide range of awesome quality android phones. This latest smartphone features an extremely powerful processor,  a great quality camera, apart from offering an enormous storage option. Hence if you want to buy such an android phone, there wouldn’t be any better choice than this. 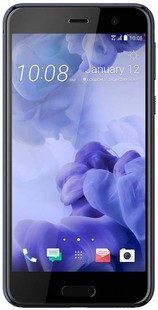 Rating:
None Out of 52 reviews