HTC One A9 Price

HTC One A9 features and review

HTC is a brand that has slowly and steadily made its presence felt in the market. It has come up with some amazing smartphones and they have recently introduced the HTC One A9 phone. Scroll down to find out about the HTC One A9 specifications and our HTC One A9 review.

The best part about this phone is that it comes with a surety of HTC. Also, HTC One A9 is a very light phone when compared to the other phones of the same size in the market.

Chinese brands in the present market provide much more features than the ones given by HTC. It is probably a setback for all the mobile brands which are not Chinese. And, with the growing market, people tend to invest on a Chinese phone with more features at a lesser price.

The HTC One A9 design is its trademark HTC design and has a single Nano SIM slot. A fingerprint sensor has been added on the lower bezel in the front. The volume rocker and the power button are placed one below the other on the right hand side. It has come out in a variety of colours such as Carbon Grey, Opal Silver, Topaz Gold, Deep Garnet and Pink.

HTC One A9 display has a 5.0 inch AMOLED capacitive touchscreen. The resolution given is 1080x1920 pixels with a pixel density of ~441. The display is quite sharp yet light on the eyes. The screen to body ratio is 66.8%. HTC One A9 mobile has also added a Corning Gorilla Glass 3 and HTC Sense which provides maximum display protection and a fabulous clarity.

The HTC One A9 storage has 16GB and 32GB variants. It is quite low when compared to the other phones in the market but then again it has provided an expandable storage up to 256GB along with a micro SD slot.

The HTC One A9 has a non-removable 2150mAh battery and features a fast battery charging with the help of Quick Charge 3.0. The HTC One A9 battery seems to be quite a mediocre one. It can probably last you for about half a day of internet and phone usage.

This phone has two variants which consist of 2GB and 3GB RAM. Both of them are provided with an Octa-core (4x1.5 GHz Cortex-A53 & 4x1.2 GHz Cortex-A53) and a chipset of Qualcomm MSM8952 Snapdragon 617 which helps the phone run smoothly.

HTC One A9 specs sound good but there is nothing really remarkable about it. The HTC One A9 price in India is  24,990 INR which is way too high for the features provided in the phone. 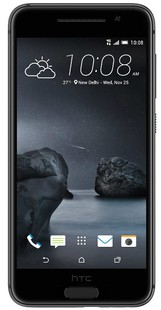 HTC One A9 Price Graph

HTC One A9 Specifications:

HTC One A9 Price Details