HP Elite X3 is one of the phones that is most awaited for the year 2017. The launch is awaited, for, it would be featuring a Windows 10 OS alongside latest specs, features and a lot more bells and whistles you’d expect from the makers of the best Laptops and tablets in the industry.

The HP Elite X3 mobile features a Windows 10 operating system that boots on a Qualcomm MSM8996 Snapdragon 820 chipset and a Quad-core (2x2.15 GHz Kryo & 2x1.6 GHz Kryo) processor. The device is powered by a 4GB RAM and an Adreno 530 GPU unit. For a phone at the price that it comes with, the specs offered are less, for, the 4GB RAM and Quad-core processor are low in number when compared to what its competitors have to offer.

The HP Elite X3’s camera specs includes the presence of a 16+8MP camera unit. The 16MP primary camera has a wide aperture of f/2.2 that allows the user to make the most of the configuration of the camera to capture best in class videos and snaps. The other features of the camera are Geo-tagging, touch focus, face detection, HDR, panorama, and LED flash.

The selfie shooter on this large screened phone is an 8MP unit.

The HP Elite X3 specs of the design element is impressive. The massive phablet like screen is embedded into a design that allows the user to get the most of smartphone computing even with a single hand. The fingerprint scanner is mounted to the back to allow unlocking with ease. The screen produces a display output of 1440 x 2560 pixels with a pixel density of 494 pixels per inch. This resolution of the screen is promising, for all the gamers and avid video watchers can have an experience which is absolutely not stressful to their eyes.

This massive structure is protected from external damage by the presence of a Corning Gorilla Glass 4 unit.

The HP Elite X3 battery life is long, thanks to its huge 4150 mAh battery unit that keeps the phone powered on for close to day in regular phone and internet usage conditions. The numbers on its standby duration and music playback time are not out yet, guess, we’d have to wait and watch.

The HP Elite X3 comes with adequate storage options. The internal storage space on this super phone will be 64GB and this supports the use of expandable memory up to 256GB. There are two variants, one has a dedicated memory slot, while the later comes with a Hybrid slot.

The HP Elite X3’s expected price is to be around 65,000 INR upon launch. This premium device has all the bells and whistles that you’d expect from a premium phone. It competes with the Samsung Galaxy S7 Edge Plus, Google Pixel, iPhone 7, and more. 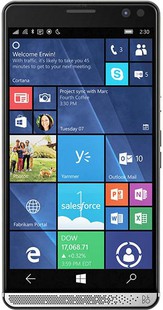