Huawei Technologies Co. Ltd. is a global networking and telecommunications equipment giant based out of China. The Honor V10 handset is the latest addition to the Honor family, which is a sub-brand of Huawei. Huawei Honor V 10  is considered as a unique smartphone in the Honor product portfolio.

This is an upcoming flagship Android phone that ships with AI (artificial intelligence). It will be the successor of the Honor V9. Going by the company’s past history, the Honor V10 would be first rolled out in China before launching in other markets. The phone will be available in Black, blue, and white colour variants. The Honor V10 release date in India would be in early 2018. The Honor V10 price in India starts from Rs.34,395.

In terms of hardware, a HiSilicon Kirin 970 chipset seated upon, an Octa-core (2x 2.4GHz Cortex A73 Quad-core) processor gets support from a 4GB/6GB RAM to handle the complete performance of the system. The Honor V10 runs on Android v7.0 (Nougat) OS. The 6GB of RAM makes sure that users experience a seamless and lag-free smartphone experience. The Octa-core processor aids in dealing with tasks more comfortably. A Mali-G72 MP12 GPU is available and manages the graphics requirements of the handset.

The Honor V10 is equipped with a dual primary camera setup consisting of 12MP resolution each. Those main shooters are useful for wide-angle and in-depth shooting and can shoot 4k resolution videos at a speed of 30fps. The main camera is armed with features like Auto Flash, Digital Zoom,  Face detection, Touch to focus etc.

An 8MP front-facing selfie camera is seated above the display that can be utilized for video calling and can record Full HD videos.

The Honor V10 flaunts a 5.7-inch IPS LCD Full HD display. It features a screen resolution of 2160 x 1440 pixels. The phablet is housed in a metallic body and a fingerprint scanner has been incorporated for better security.  When compared to LCD Displays, the sharpness is better in case of IPS LCD technology, which makes the images realistic by displaying more natural colours. The functionality is as well good in bright sunlight.

The Honor V10 comes with  64GB/128GB of default storage, which can be further expanded up to 256GB using a MicroSD card.

The gadget draws its required juice from a 3000 mAh Li-Ion battery. The battery assures non stop show for mobile users. However, the battery is not removable.

With a superior configuration at the heart, the Honor V10 is one of the strongest Android phones at this price point. The monstrous storage enables a user to store adequate amount of songs, videos, and applications. You can shoot crisp clear photos and high-resolution videos with the cameras. To sum it up, this handset is a true performer.You can certainly go for it if you are scouting for a smartphone with superior performance. 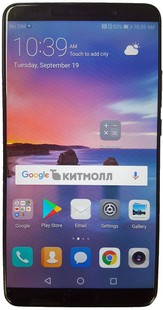