The Honor Holly 3 offers competitive specs as it comes with a built-in Emotion 4.01 UI which is aided by the Android Marshmallow operating system. The phone comes with a HiSilicon Kirin 620 chipset and an Octa-core 1.2 GHz Cortex-A53 processor. High-speed computing and graphics on the device are powered by a 2GB RAM unit a Mali-450MP4 GPU.

The Honor Holly 3 comes with an internal storage space of 16GB and this can be expanded up to 128GB using an external memory card. So, running out of storage space or deleting existing content shouldn’t be a thing that you should be worried about with this device.

The Honor Holly 3 display unit is a 5.5 inch IPS LCD touchscreen which features a screen to body ratio of 70.1%. This display unit produces an output of 720 x 1280 pixels with a pixel density of 267 pixels per inch.

The Honor Holly 3 features a 3100 mAh battery which keeps the lights on the device for an average of 12-16 hours at average usage in a full charge.

The Honor Holly 3 features good RAM, processor, camera, storage and battery specifications that make this is a good buying choice from Huawei. However, competitor products like the Coolpad Note 5 and Lenovo Vibe K5 which fall in the same price offer better features like the fingerprint scanner and Dolby Atmos sound units in them. 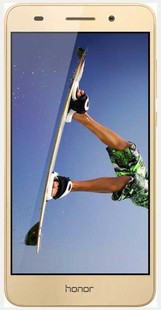