The Chinese telecommunications firm is into manufacturing of mobile phones and telecom infrastructure in the world. The company also makes Android smartphones and tablets. Recently it has stepped into the smartwatch market with an Android Wear based device. It is another one of the big smartphone manufacturers from China. Huawei Terminal brand Honor at its event launched the Honor 6A to its smartphone portfolio. The Honor 6A is a budget smartphone that features a full-metal unibody along with a fingerprint scanner. The Honor 6A price is  CNY 799 (approximately Rs. 7,500) for the 2GB/ 16GB variant and CNY 999 (approximately Rs. 9,400) for the 3GB/ 32GB model. It comes in Gold, Silver, Blue, and Pink colours.

The Huawei Honor 6A is powered by a 1.2GHz Quad-core Qualcomm Snapdragon 430 processor and it comes with 2GB of RAM. The phone packs 16GB of internal storage that can be expanded up to 128GB via a microSD card. As far as the cameras are concerned, the Huawei Honor 6A packs a 13-megapixel primary camera on the rear and a 5-megapixel front shooter for selfies. The handset runs on Android v7.0 (Nougat) operating system. Huawei Honor 6A Comes with Aluminium Metal Body Design, LTE 50 Mbps, HSPA plus, LTE CAT4 150 Mbps Download, HSUPA 5.76 Mbps Upload, HSDPA 21 Mbps Download, Computer Sync, OTA Sync, Tethering, 2.5D Curved Glass Screen, Smart Power Saving Mode, HD Voice, Rounded Edges, Fast Charging Technology. The Honor 6A comes with a fingerprint scanner below the camera at the back which the company claims will unlock the device in just 0.5 seconds to ease the usability.

Camera Huawei Honor 6A is armed with a 13-megapixel rear camera with a 28mm 5P lens with features like PDAF, full-HD video recording, and dual-LED flash. On the front side, the smartphone has a 5-megapixel camera.

Display and Configuration Huawei Honor 6A smartphone was launched in May 2017. The phone is built with a 5.00-inch touchscreen display with a resolution of 720 pixels by 1280 pixels. The Huawei Honor 6A flaunts a 5-inch IPS LCD HD (720 x 1,280 pixels) display.

The Honor 6A is a compact metal phone which equipped with long lasting battery life. It outputs excellent performance and features a quick responsive fingerprint sensor. The display and camera quality are good. Overall, the phone is worth buying at its price tag. 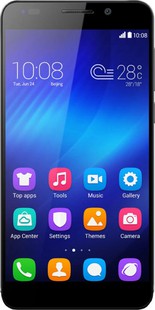