Gionee is a Chinese brand with a robust pan India retail presence, avoiding the trend of online sales only. Gionee X1s is the latest addition to its product portfoilo. The Gionee X1s can be simply dubbed as the elder brother of the Gionee X1 which was introduced earlier. The Gionee X1 s is available in multiple colour options such as Gold and Black and are also priced similarly. Gionee X1s price in India is expected to be INR. 12999. Gionee has announced that the device will be available across all retail stores in India from September 21st.

Powering the device is a 1.5GHz Quad-core MediaTek MT6737T chipset which is mated with 3GB RAM. A Mali-T720 MP2 graphics engine takes care of visualization, which results in the superior display while gaming. The 3GB of RAM ensures a smooth and flawless Android experience. Mobile users can play games and as well work on more than two apps at the same time to some extent with ease. As far as the software is concerned, this smartphone runs on the Android 7.0 Nougat OS.

The Gionee X1s features a 13 MP shooter and 16 MP shooter respectively one at the rear and one at the front. The imaging piece at the rear is assisted with an LED flash to manage low-light images and videos. On the other hand, the front-facing shooter is suitable for video calling and taking high resolution selfies.

In terms of display, the Gionee X1s boasts its 5.2-inch IPS LCD display (720 x 1280 pixels), which is bright and is paired with good viewing angles. The display on the Gionee X1s is guarded against any unwarranted scratches, courtesy Corning Gorilla Glass 3. The handset isn't very large and sports a sleek design, which makes the android phone easily, fit in the pocket or on a palm. The mobile phone flaunts a fingerprint scanner at the rear, which the firm says can unlock the gadget in < 0.3 seconds and as well doubles as camera shutter button.

One need not bother about any storage problems for media files, apps, and other data, a 16GB of onboard storage space is available which can be upgraded through a microSD card up to 256 GB.

In order to enable the entertainment running for continuous hours, the handset draws its energy from a non-removable 34,000mAh Li-Polymer battery.

To conclude, The Gionee X1s is a reliable handset with super battery backup a fingerprint sensor. The X1s brings to the customer high-end photography and advanced functionalities that go way beyond the conventional boundaries of this price band. The device offers an extraordinary amalgam of latest technology supported with improvised selfie + battery features. Gionee has always been enthusiastic to surprise its customers with superb quality handsets at affordable prices. The firm continues this philosophy in the all-new X1s which will surely be a pleasure for the users 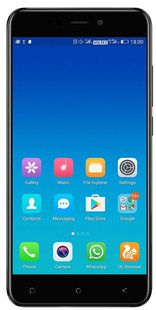 Rating:
None Out of 15 reviews