Gionee S10 Lite is one more selfie-centric Android handset on the market. The device is a step-down version of the Gionee S10 when it comes to specifications. The price of Gionee S10 Lite price in India starts from INR 15,999 and is due to be rolled out in January 2018.This handset is available in different colour options such as Black and Gold which are as well priced similarly.

Under the skin, there is a Quad-core Snapdragon 427 processor which is clocking at 1.4GHz. This is mated with 4GB RAM to make sure quick and seamless functionality even when you are navigating through multiple apps simultaneously or when indulging in graphics-intensive games such as Mortal Combat or Asphalt 8. On the software ground, the handset boots on the Android 7.1 Nougat with the proprietary Amigo 4.0 OS on the top.

In the imaging department, the Android smartphone is armed with a 13 Megapixel rear sensor. This along with an LED flash can be used to snap low-light images as well as videos. Since it is a selfie-centric mobile phone, the handset is equipped with a superb front-facing snapper. On the front, for self-portraits and video telephony, the handset features a 16 Megapixel front shooter.

The handset features a 5.2-inch HD TFT display which is satisfactory but not overwhelming. The screen is as well mated with nice viewing angles and outputs crisp videos. But, in outdoors, under bright light, the display on the Android smartphone seems to fade away. The screen on this latest Gionee handset is covered by a coating of Corning's Gorilla Glass. The handset flaunts a metal unibody design and sports a fingerprint scanner which is found at the front and seated in the home button. It can be utilized to unlock the handset in less than 0.3 seconds. Adding to that, one gets to store multiple fingerprints too. The thickness of the device is 7.9 mm thick and weight is  155 grams.

There is a default storage of 32GB  on the Gionee S10 Lite. This is further expandable up to 256GB via a microSD card. Hence you have a good amount of space to accommodate all that you need from media files to personal files and apps.

The Gionee S10 Lite is juiced by a non-removable 3100mAh Li-Ion battery.This can last for a full day for a moderate user, and the company says that it can provide a talk time of around 8 hours.

The Gionee S10 Lite is a sturdy smartphone with all the required functionalities on offer. The secondary camera, with LED flash, outputs mesmerising images which are superior to most other brands in this price band. Besides, the back camera is equally nice to record videos and snap pictures of high resolution. Moreover, the handset is ideal for heavy multitasking and indulging in high-resolution games. To sum up, the Gionee S10 Lite is a nice choice to buy. 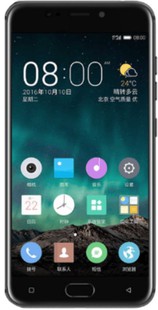