Gionee is a Chinese multinational manufacturer of smartphones headquartered in Shenzen, Guangdong. Gionee mobiles have set up its market base in various countries of the world including  Taiwan, India, Bangladesh, Nigeria, Vietnam, Myanmar, Nepal, Thailand, the Philippines and Algeria.

The devices is powered by a MediaTek Helio chipset, an Octa-core processor and packed with 3GB RAM for seamless multitasking.

The Gionee P7 features 3GB RAM along with a Mediatek, Helio Chipset. The phone comes with an Octa-Core processor to provide effortless multitasking android experience. The Android 6.0 Installed on the device is said to be minimalist in nature. The phone has internal memory of 32GB and has a dedicated slot for external memory which can be expanded up to 128GB.

The Gionee P7 specification of the camera are quite impressive. The camera has features including Autofocus, Gesture Shot, Voice capture, Face beauty and more. The primary camera is of 13MP and the secondary camera is 5MP. The images shot from the phone are expected to be clear, for, the Predecessor Gionee M6, did prove its mettle in this segment.

The Gionee P7 will be launched with a 5.5 inch LCD screen. The screen resolution will support the 16M colour format. The  scratch resistant display’s resolution is 720x 1280 with a pixel density of 267 ppi. With this display configuration using the phone under the sun shouldn’t be much of a problem.

The Gionee P7 Max has a 3100 mAh quick charge battery claims to have a standby time of 290 Hours (Not official), Talk time of 10 Hours (Not official) and music play back time of 60 hours. With 3G, 4G and continuous connectivity, this 3100mAh battery should run until end of a day on a full charge.

The Gionee P7 Max Full specification so far shows that the phone comes packed with all the bells and whistles one would expect from a premium smartphone. The latest Android Operating system, along with top-notch processors and Cpu’s promise to provide the user with a rich multi-tasking Android experience. The option to expand or to use external memory assures you that you wouldn’t end up deleting pictures as and when you wish to click a new one. The 13MP and 5MP camera with its features sound promising. The Gionee P7 Mobile price in India is said to be  around INR 20,000. Gionee currently competes with Mi and Lenovo in this space. 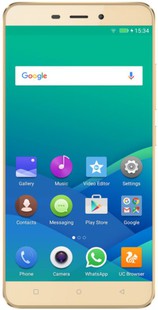 Rating:
None Out of 228 reviews