Established in the year 2002, this China-based company has made a solid mark for itself in the Indian market. It is one of the very few Chinese companies which started off by selling their products offline in contradictory to the other Chinese brands such as Xiaomi.

Some of the Gionee P5W features that stand out in this phone are its 5 inches display with a resolution of 720 x 1280 pixels. It has a 16GB internal storage complementing the phone. Gionee P5W price in India is 5949 INR.

Let’s find out about the Gionee P5W full specifications starting with its processor. It has a powerful Octa-core and a MediaTek MT6735 Chipset. The GPU stands at Mali-T720MP2 with a frequency of 1.3GHz. and it is packed in an architecture of Cortex A53.

Moving on to the Gionee P5W camera review, it has a 5mp rear camera and 2mp front camera. It does have video recording with a quality of [email protected] The other features included are Digital Zoom, Auto Flash, Digital image stabilization, Face detection, Touch to focus, Exposure compensation and ISO control.

It focuses on the prominence of the display. The lower bezel has all the capacitive buttons. The side bezels are kept to the minimum. The front camera is placed in the top right corner. The power button follows the volume rocker after a little gap on the right-hand side of the brim of the phone. The rear camera is placed on the top left corner on the back and the LED flash follows right after it. The main speakers are placed on the lower bezel in the back. Gionee has launched this phone in bright colours of blue, red and yellow too.

As mentioned before, the Gionee P5W display is 5 inches in size with a screen resolution of 720 x 1280 pixels and IPS LCD display. It also has a pixel density of 294 ppi. The screen to body percentage is 66.8%. Gionee has also added the multi-touch feature to this model.

Gionee P5W internal memory is of 16GB which can be increased by adding a MicroSD card up to 32GB. A higher expandable memory would have been better as phones of the lower price range such as Karbonn A108 Plus are giving in the same amount of expandable storage.

According to the Gionee P5W review, it has done an impressive job of adding in a lot of high-end features when compared to its price. . You can also compare it with phones from Meizu, Gionee and Xiaomi. 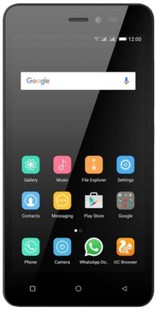