The 6020 mAh battery and the 3GB RAM are the attributes that have made this model a star in its competition.  The Gionee Marathon M5’s price in India is also one of its strong points, for, there is value for money in this product.

The 5.5-inch screen is not full HD, hence the images aren’t as sharp as you’d expect. The phone weighs 242 grams, hence the heaviest smartphone in the competition.

Gionee Marathon M5 is one of its kind. With a 6020 mAh battery, it provides 24 hours video playback. The 5.5-inch screen AMOLED screen manages to display pictures which are clear, crisp and sharp. The Mediatek MT6735 chipset with Quad-core 1.3 GHz Cortex-A53 processor provides its user a seamless multitasking experience with nill lag.

The makers of Gionee Marathon M5 have managed to make the phone slimmer by 8mm when compared to its predecessors Gionee Marathon M3 or Gionee Marathon M4 and that has resulted in it becoming a little longer. The phone has a sturdy build with the combination of plastic and metal. The only downside though is that the phone weighs 240 grams.

The Gionee Marathon M5 comes with a 5.5 Inch AMOLED screen with 720 x 1280 pixel resolution. This display structure supports the 16M color feature and comes with the Corning Gorilla Glass 3.

The Gionee Marathon M5 has a 13MP primary camera with LED flash. This features phase detection autofocus, Geo-tagging, touch focus, face/smile detection, panorama, and  HDR. The camera is capable of recording videos of [email protected] It also features a 5MP secondary camera with a focal length of 2.2

The Gionee Marathon M5 runs on an Android 5.01 operating system with a Mediatek MT6735 chipset and is powered by a Quad-core 1.3 GHz Cortex-A53 CPU. The 3GB RAM ensures seamless multitasking while browsing, gaming, or just using the other applications.

The Gionee Marathon M5 price in India though on a higher side, is still value for money. As those extra bucks will ensure that you go around without charge or a power bank for a few days. This is a steal deal for those who are usually on travel trips and are not always in reach with charge points. The camera is also efficient in clicking quality pictures. The goods under the hood give its users an effortless smartphone experience. Gionee competes with brands like Lenovo and Samsung in this space.

Gionee Marathon M5 full specs and reviews as of Jan 2023. Buy it here! 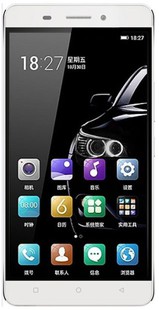