Gionee is all set to join the bandwagon of bezel-less android device manufacturers. Before the formal launch, live pictures of the upcoming handset has been leaked online, which throws some light on the phone features. Gionee's next-generation M7 smartphone is said to have a bezel-less design, similar to the iPhone X and Galaxy Note 8. The Gionee M7 is the successor to the Gionee M6 that comes with a  much-improved hardware. The smartphone flaunts an all metal unibody design which is covered with rounded edges. Gionee M7 price in India is expected to be Rs. 27,990. Also, the device sports ultra-slim bezels and are the first device from Gionee to sport a full-screen display.According to the company, the Gionee M7 release date in India phone will be on September 25.

The device is powered by a Cortex A53 Octa-core 2.3GHz processor placed on MediaTek MT 6758 chipset and this configuration is mated with 6GB of RAM. This configuration can promise very trouble-free performance even under the most stressful conditions. The Gionee M7 runs the Android 7.1.1 Nougat operating system out of the box with Amigo OS 4.0.

For camera lovers, the device comes with 16 MP  rear camera which is equipped with phase detection autofocus. The presence of LED flash is designed for shots in low light environment. On the front, to please selfie lovers, there is an 8 MP facing more snap.

One of the remarkable features of the device is its display; the device sports a 6-inch display, which is dazzling and combined with nice viewing angles. The display uses Super AMOLED Capacitive technology. It as well comes with a  screen resolution of 1,080 x 2,160 pixels. The handset features an aspect ratio of 18:9, which is now an emerging trend in the mobile phone industry.The screen is guarded by a Corning Gorilla Glass and user need not worry about damages and scratches. The device also hosts a rear-mounted fingerprint reader which is slotted below the camera module and can be used to unlock the device. The device comes with various connectivity options that include 4G, Bluetooth 4.2, GPS, Wi-Fi 802.11 b/g/n, and a micro USB 2.0 port.

For storing media files, sensitive data and apps, the device comes with 64GB of internal storage space – this is expandable based on user needs.

In the storage area, the Gionee M7 ships with the same battery as the M6. The device is fuelled by a non-removable Li-Ion 2500mAh battery – can last for more than a day despite heavy usage.

Armed with a stylish design, the Gionee M7  is a powerful phablet and boasts a lot of strong features. It is really a solid performer as the gadget features  a  strong processor and adequate amount of RAM. Both the cameras shoot marvellous images and superior quality videos. To conclude, the Gionee M7 is one of the nicest options in its price band. 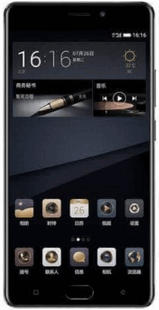