The Gionee M7 Plus full specifications and speculative review

At it heart lies an Octa-core, Cortex A53 processor clocked at 2.3GHz, which is seated on a MediaTek chipset. This is combined with 6GB of RAM. Multitasking and gaming experience will be flawless and lag-free. Software-wise, the smartphone boots on Android v7.1.1 (Nougat) operating system.

In terms of optics, the Gionee M7 Plus boasts of a pair of primary cameras  with a resolution of 16MP + 8MP. The dual primary camera setup is featured with sensors like High Dynamic Range mode(HDR), Autofocus, and smile detection apart from an LED flash. Snapping selfies and conducting video telephony is managed by a nice 13MP front shooter. The LED flash option in the rear-facing camera is useful to shoot life-like pictures even in extremely unfavourable conditions.

The Gionee M7 Plus presents a 6-inch AMOLED touch screen display. It commands a screen resolution of 1080 x 2160 pixels. The high screen resolution delivers a  decent pixel density of 377 PPI . The display is brilliant  and is paired with awesome viewing angles that provide an extraordinary visual treat while viewing videos or gaming. Besides, the screen is covered by a Corning Gorilla Glass which guards the screen against minor scratches and impacts.The smartphone boasts of a metal unibody design and flaunts rounded corners on all sides that matches a rich look and feel. The big gadget is not much of a hassle to hold and carry around thanks to the rounded edges. As well, you get a fingerprint sensor to unlock the phablet which is integrated into the home button in the front.

In the storage department, the handset is armed with a native storage capacity of 64GB which is adequate for storing apps, media files, and other data. In case, your requirements are not met, there is a choice to upgrade up to 128GB via a MicroSD card.

For power, Gionee M7 Plus is juiced with a Li-Ion 4,500mAh battery which is non-removable. Even when considering heavy usage, this is said to last for more than one day

The Gionee M7 Plus is an outstanding smartphone loaded with all the functionalities that a mobile user expects. The display is especially ideal for playing games and watching videos, thanks to the large screen which imparts sharpness. It is jazzy, secure, and powerful leading to stable performance. 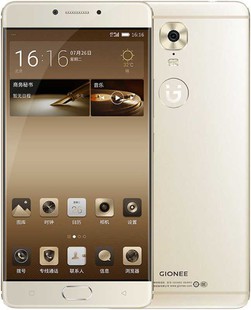