Gionee mobiles have made its presence felt in the Indian and Asian smartphone space in a very little time. It’s futuristic design, features, and price has made it a widely chosen buying option for users who are always on the go and don’t mind experimenting with something new The Gionee Elife S6 is one such phone that has made it big in India.

The Gionee M6’s camera unit is a 13+8 unit. The 13MP primary camera features a wide aperture of f/2.0. Other features of the camera include 1/3" sensor size, 1.12 µm pixel size, geo-tagging, touch focus, face detection, panorama, HDR,  phase detection autofocus, and dual-LED flash. The videos recorded on this are of 1080p resolution at 30 frames per second.

The selfie shooter on the Gionee M6 is a 8MP unit that accommodates wide selfies, thanks to its wide aperture of f/2.2

The Gionee M6’s configuration of the design is impressive. The Chinese manufacturers have made the design futuristic and that puts its way ahead of most of its competitors. It sports a 5.5-inch AMOLED touchscreen with a screen to body ratio of 72.7%. The screen produces a display output of 1080 x 1920 pixels with a pixel density of 401 pixels per inch. The screen supports multi touch feature as well.

The Gionee M6 battery is a massive 5000 mAh non-removable Li-po unit. This should be able to give the user a day or more than that of charge in a single charge. The presence of fast charge is the icing on the cake.

The Gionee M6 full specification of the storage consists of the adequate internal and external storage. The phone comes with a 64GB and a 128GB internal storage capacity variant. Both of these support the use of external memory up to 256GB through a dedicated slot.

The Gionee M6 price in India is to be around 29,999 rupees on launch. The phone has a perfect amalgam of design, camera, processor, storage, battery, and price. Thus making the Gionee M6 a good buying choice. At this price, it competes with the Oneplus 3 and Moto X-Force. 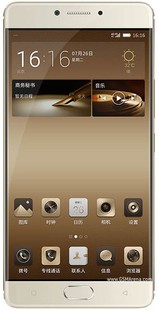