Gionee Mobiles is a Chinese brand that has been introduced to the Smartphone race in India close to 5 years ago. The Gionee Elife S6 and the Gionee Elife S5.5 are two of the many phones from Gionee that has made it big in the smartphone market with their price, features, and service.

The Gionee M6 Plus features  of the processor includes an Android Marshmallow operating system along with a Mediatek MT6755 Helio P10 chipset and an Octa-core (4x2.0 GHz Cortex-A53 & 4x1.0 GHz Cortex-A53) processor. The phone’s jet speed in multi tasking and gaming is powered by a 4GB RAM unit and a Mali-T860MP2 GPU.

The camera records 1080p videos at 30 frames per second.

The selfie shooter on this is a 8MP unit which does a good job accommodating wide angles selfies with an aperture of f/2.2.

Design and Display:The Gionee M6 Plus full specs of the design and display are out. The design of the phone is very similar to its predecessor the Gionee M6. It comes with a 6-inch AMOLED screen with a screen to body ratio of 76.6%. The large display unit produces an  output of 1080 x 1920 pixels with a pixel density of 367 pixels per inch.  The presence of a protective layer of the screen is not confirmed yet.

The Gionee M6 Plus’s large battery life is credited to its large 6020 mAh battery. This is one of the key features that will attract users. For, this battery will last the user with enough charge for one or two days.

The Gionee M6 Plus specifications are impressive. For, they come with a 64GB internal storage variant and a 128GB one. Both these support the use of an external memory card up to 256GB. The presence of a dedicated memory card slot does not deprive the user of using the SIM card slot II when the memory card is in use.

The Gionee M6 Plus price in India and specifications are balanced with great efficiency. Keeping in mind the specs, features, and competitive prices in mind, the price of the phone is placed rightly at 32,000 INR. The phone at this price competes with Oneplus 3T 128gb, Moto Z play, and the Mi Mix 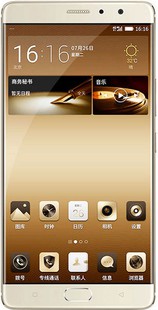