Gionee has recently entered the Indian market and is doing quite well for itself. It has been releasing game changing phones since it has entered and this time around it has come out with the Gionee M2017 phone and by the looks of the Gionee M2017 full specifications, it looks to be a fabulous phone.

As the flagship phone of Gionee, the Gionee M2017 features are quite powerful which will probably give a tough competition to its peers in the market. Some of the features have been provided with better specs than its competitors in the price range lower than many of the flagship phones.

There is not much that you can point out to be bad in this phone other than the weight. It is on the higher side which is a negative but then again it depends on your requirements.

The Gionee M2017 mobile has been designed to be very unique and different. It has a very elegant and stoic look about it and looks like a solid phone made of metal with a rubberized back to help you have a better grip. It is also a big phone when compared to the normal phones in the market. Gionee has embedded its logo under the camera and then again on the back of the lower bezel.

Gionee M2017 display has a 5.7 inches screen with a resolution of 1440 x 2560 Pixels with 515 pixel density which is quite remarkable. It has a very vibrant and sharp display. The AMOLED touchscreen is capacitive and has been included with the Multi touch option too.

Internal Gionee M2017 storage is as high as 128GB. There is no expandable slot available but then with a storage as high as this you most probably won’t need a larger memory space.

Gionee M2017 battery is exemplary at 7000mAh. Technically this battery should hold charge enough for two days with heavy Internet and phone usage which is fantastic for a phone. The battery is definitely the most important Gionee M2017 feature.

Another USP would be the Gionee M2017 camera features. A 12MP + 13MP dual rear camera is enough to make us swoon along with the 8 MP secondary camera.

This phone runs on a 6GB RAM which should make the phone run smoothly without any glitches. Gionee M2017 phone comes with an Octa core processor and a chipset of Qualcomm Snapdragon 653. The Android version given is of 6.0 Marshmallow and not the latest version. 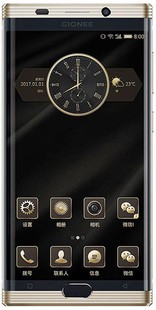