Gionee has taken the market by storm since it has entered. With its unique features it is here to stay. This time they have come up with the Gionee GN5005 model. Gionee is giving stiff competition to its competitors Oppo and Vivo. Not much is known about this phone though it is heard to be a decent phone.

The first look of Gionee GN5005 will make you realize that they have stuck to their trademark design of being a prim and grand package. The golden variant of this model is doing its rounds on the internet. Gionee has packed this phone with some basic as well as decent quality features such as a good RAM and a memory.

Gionee GN5005 phone does not come with the latest Android version. But then again it is not very expected for the Chinese phones to come up with the latest Android version as this has not been their trend. Also the Gionee GN5005 battery capacity may not be up to their trademark standards. The Gionee battery backup was one of the selling points of this brand but the trend has changed in the recent times.

The Gionee GN5005 display has a decent screen size of 5 inches. It has a HD resolution (1280 x 720 pixels) for this phone which is remarkable in its category. It has a home button and two other capacitive buttons. The speakers of the phone are provided at the bottom under the lower bezel. Most of the Chinese phones now come with the speakers at the bottom. As of now its said to be available in only one colour - gold. Gionee seems to be playing around its signature colour itself.

The Gionee GN5005 camera features an 8mp rear camera and 5mp secondary camera. The camera could have been provided to be of higher mp but then again it is fine in its range. When it comes to the Gionee GN5005 storage, it is said to be including at least a 3GB RAM along with 16GB of internal memory. It also gives an option of extending the memory to 256GB by using an micro SD card in the secondary SIM slot.

A 3GB RAM should work well for the quad core processor of 1.25GHz as being provided in this model. Rest will be known once it is released and tested.

Considering the other products that Gionee has released this too looks a fairly good phone. With all the Gionee GN5005 specs mentioned this might work well as a budget phone since the Gionee GN5005 price in India is approximately 9,999 INR. 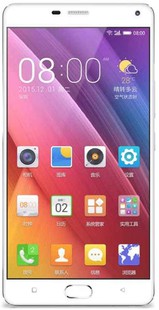