The latest version of android, the 7.0 Nougat is a bliss for technology freaks. The phone’s storage is amazing for this price range and is definitely one of the most pocket-friendly phones in the market. The 16GB internal memory, 2GB RAM and a microSD card expandable to 64 GB would lure you and make you want this phone all the more.

General Mobile isn’t a well-known brand yet hence it would be difficult for the buyers to trust the brand so soon.

The General Mobile GM5 embraces metal edges and has textured back panel. GM5 measures 5.53 inches in length, 2.74 in width and .36 inch in thickness. The phone weighs 160 grams. The camera is placed in the center with the power and volume button placed on the right side of the mobile. The phone is designed for easy single hand operation.

The General Mobile GM5 comes with a screen resolution of 720 x1280 pixels and gives an IPS LCD display of capacitive 5-inch touch screen. The pixel density of the phone is 294 ppi. For protection, it has a built in Corning Gorilla Glass 4.

The General Mobile GM5 has a 13 MP rear camera with features like auto focus, dual LED flash which makes you capture snapshots at night and a 5 MP front camera. Video recording, touch focus and face detection are available as secondary features in the phone.

The General Mobile GM5 has a non-removable battery of 2500mAh with a standby for almost 50 hours. The battery type is Li-ion and lasts for 5-6 hours.

This phone is powered by a 1.2 GHz Quad-Core, Qualcomm Snapdragon chipset processor with a GPU of Adreno 306. The General Mobile GM5 is equipped with an out of the box Android 7.0 Nougat version which is a rare feature in cell phones in the current market.

Connectivity options of General Mobile GM5 include Wi-Fi of 802.11 a/g/n. It also has a 4.0 Bluetooth with a 2G, 3G or 4G connectivity. Dual Sim configuration is present in the phone with micro Sim slots. USB and GPS connectivity are also incorporated. The sensors in the phone have proximity, temperature sensor, an accelerometer and a compass which helps in locating directions.

Why go for the General Mobile GM5?

The General Mobile GM5 with its smart features comes in different colours like space gray, golden and black. The Turkish manufacturer is making these cell phones available in many different countries and it is easy to grab one. Motorola, Mi and Lenovo are the major competitors in this range of 10000 INR.

General Mobile GM5 full specs and reviews as of May 2022. Buy it here! 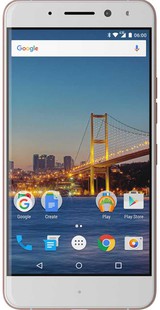