The Coolpad 3632 is the latest handset from the house of Coolpad Group. The Coolpad 3632 is an entry-level Android phone with a large display and basic hardware features. The handset does not feature any flashy options such as a fingerprint scanner, or an infrared emitter, like few of its competitors. But, that is complemented by its large screen size. The device features Coolpad branding on the front and the back of the handset and a gold accent all-around.The cost of the gadget in India begins from Rs.7,999 and is due to be rolled out in last week of December 2017.

Despite being a pocket-friendly handset the Coolpad 3632 flaunts the Qualcomm's  Quad-core Snapdragon 425 motherboard; it is not just an energy-efficient motherboard, but its functions are superior to a similarly priced chipset from MediaTek. Unfortunately, the handset features a dismal 1GB RAM. However, the Coolpad 3632 features an Android 7.1 Nougat Operating system. This latest Android OS  will definitely enhance the handset’s appeal among the customers. The UI has been slightly customized, which results in squared application icons a missing application launcher.

In the imaging department also, the Coolpad 3632  presents limited basic hardware. The handset has a 5MP rear camera and a 2MP front shooter. The rear camera comes with an LED flash, Autofocus, Geo-tagging, Touch focus, Face detection, and HDR.  The secondary shooter is just a fixed focus piece and lacks flash. However, the primary camera can record Full HD videos. You have the option to shoot 1080p videos at a speed of 30fps. Video telephony with the selfie camera is easy. However, the image quality delivered by selfie shooter is not so great.

The Coolpad 3632 features a large 6.1-inch IPS LCD display, however, it is a big disappointment due to its poor FWVGA resolution, The resolution of 480x854 resolution results in ideation and jaggedness while watching the display. Hence on this device, browsing internet will not be an apt choice.

For saving media files, apps, and presentations the mobile user gets an internal storage of 8GB and features an external memory card slot. Users can increase the internal storage up to 32GB using a microSD card.

This phablet derives its energy from a Li-ion 3,000mAh battery in order to ensure the show runs for long hours.

The Coolpad 3632 is a large size device and features dual-SIM and good battery capacity. You have the option to watch movies and play games on a large screen. The main shooter at the rear snaps nice images and enables Full HD video shooting. However, the cost seems to be higher as the device has limited RAM. One can think about other alternatives as there are many good devices available in this price range at a more competitive price. 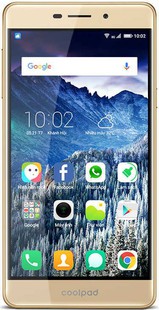