BLU Vivo 5 comes with a great 13mp rear camera and a 5mp primary camera. It is based on Android 5.1 (Lollipop) with a planned upgrade to v 6.0(Marshmallow). It also comes with a 32 GB internal memory. BLU has added a battery of 3150 mAh to this model.

If you are looking for a phone with fingerprint sensor then this is not the one for you. Also, it does not run on the latest Android version. Like Chinese companies this company too runs on the 5.1 version and has a scheduled update for 6.0 but still not the latest one.

This is a phone that fits in well in the current market in par with the other Chinese phones. Whether it is as reasonable as the Chinese ones can be known sometime later since the price of the phone has not yet been declared.

By the first look, one cannot deny the uncanny similarity of the phone to that of a HTC. It looks like it has taken inspiration from the HTC range of phones. The display screen seems to be impressive and leaves no area for side bezels making the display more prominent and important. On the back the upper and the lower bezel are marked by a thin line. The rear camera is placed at the left-hand side of the bezel and the flash is on the right of the rear camera. There are capacitive buttons are in the lower bezel in the front. Whether it has its logo imprinted somewhere on the back is not yet clear.

The display comes in a generous 5.5 inches and has a screen resolution of 720 x 1280 pixels. It has pixel density of 267ppi. The screen to body percentage is at a decent 73.6%. BLU has also added the multi-touch feature to this phone. The display type is AMOLED with a capacitive touchscreen.

The rear camera is a high end one at 13MP and the secondary camera at 5MP. Video recording is aided by [email protected] Like every other smartphone in the market it has most of the basic camera features such as the phase detection autofocus, Touch focus, Face detection, Panorama and HDR.

It has an internal memory of 32GB which can be expanded up to 64GB using the microSD card Slot. It also has a 3GB RAM.

It runs on an Octa-core processor along with a Mediatek MT6753 chipset. The frequency of the phone stands at 1.3 GHz with a GPU of Mali-T720MP3.

It is released in Silver and Gold and has the sensors Accelerometer, gyro, proximity and compass.

This phone has a promising battery, display, looks and camera. If these features suffice your requirements the go for it. You can have a better look at its  features here. You can also compare with many other companies that produce phones at the same range such as Meizu, Gionee and Xiaomi. 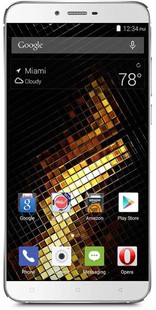