Florida-based Windows and Android smartphone maker comes with a masterpiece with the BLU Life One X2. The One X2 is said to be a beast in performance. The smartphone comes with a host of features to leave you mesmerized. With the Indian smartphone market filled with quality devices, let’s get into the details of specs to know more about what the Blu has in itself.

The device comes with a Octa-core cortex A53 processor which clocks a speed of 1.4GHz. A chipset of Qualcomm Snapdragon 430 MSM8937 and a 4GB RAM adds to the joy of multitasking. A GPU of Adreno 505 becomes a blessing in disguise for the HD lovers.

The Life One X2 from Blu houses a 16MP primary camera with LED flash, phase detection autofocus, laser autofocus, exposure compensation, ISO control, HDR, etc. These features can process images with a resolution as high as 4616 x 3464 pixels and records video of 1920 x 1080 @ 30fps. The Life One X2 primary camera pairs with a 8MP front camera, filled with a LED flash to light up the selfies in low light conditions.

The Blu Life One X2 is powered by a 3,000mAh li-polymer battery which promises to give a really long standby time. The device is equipped with v3.0 of Qualcomm Quick charge technology which promises 70% charge in 30 minutes charging.

The device proves to be a generous companion storage wise, has in it a humongous storage space of 64GB inbuilt, which can be further expanded to another 64GB with a help of a microSD.

The 5.2inch full HD IPS LCD display comes with a 1080 x 1920 pixels resolution, with a pixel density of 424 ppi. The capacitive multitouch screen is protected by v3 of corning glass and scratch resistance.

The Blu Life one X2 sure is a beast in its performance. The smartphone hosts a ton of features to mesmerize. The Life one X2 is priced at Rs.10,000. With a price tag this low for a phone so good it’s for sure to make waves. For all those people who have a craze for quality gadgets, will sure have this smartphone in their kit. 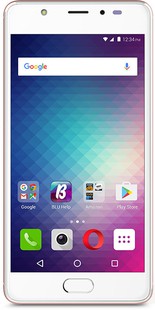