Blu Advance A5 Plus Price

BLU Products, an American company headquartered in Miami, Florida designs re-branded low-cost mobile devices. The company has been in the mobile industry since 1995 and has  decided to launch their own brand called BLU in 2010, standing for Bold Like Us.The firm produces affordable Android smartphones targeted at people living in developing countries. While all of its products are designed in BLU's base of USA, their handsets are manufactured in China.This  handset shares a similar design (including aluminium bodies) with its sibling Blu Advance A5 but differs when it comes to size and some features.BLU Advance A5 Plus price in India is expected to be Rs. 6,999 and expected to be rolled out in January, 2018.

A Cortex A53 Quad-core processor which is clocked at 1.3GHz  is supported by a 2GB of RAM and a Mali-T720 MP2  graphics processing unit (GPU) handle the overall performance of the BLU Advance A5 Plus. This is housed upon a MediaTek MT 6737 chipset, The smartphone runs on Android v7.0 (Nougat) OS.

In terms of optics, the BLU Advance A5 Plus is equipped with a 13MP rear camera and an 8MP selfie camera with an LED flash. The rear camera can capture pictures of 4128 x 3096 pixels resolution and the front shooter can snap good selfies and assists in the time of video calling.

The BLU Advance A5 Plus features a 5.5-inch IPS LCD HD display which outputs a pixel density of 267ppi. The phone features a resolution of 720 x 1280 pixels. The smartphone boasts of a trendy grey coloured body. In terms of networking and sharing, the BLU Advance A5 provides lot of functionalities such as - mobile hotspot, Bluetooth, 4G, Wi-Fi, GPS and micro USB.This latest handset is a single SIM (GSM) Android phone that uses a Micro-SIM. Compass Magnetometer, Proximity sensor, Accelerometer, Ambient light sensor and Gyroscope are the different sensors available on the phone.

In terms of storage, the Android phone features  8GB of default storage, which is expandable up to 64GB via a memory card. Internal storage allows more space for storing songs, images, videos, apps  etc

A 2,000mAh Li-ion battery is available in order to manage the show non-stop for long hours. For the price it comes at, the battery seems a little underpowered and the competition has a battery unit to offer.

The Blu Advance A5 Plus is an ideal choice for people who are scouting for a feature-packed Android phone at an affordable budget with front flash.The handset comes with a trendy look and nice pair of cameras. The front-facing camera is supported by a front flash which allows you snap perfect selfies even in dim-light. The sturdy configuration promises a superb performance in managing multitasking and playing games. If you can ignore the not so great battery backup as well as single SIM support, you can go for it.

Blu Advance A5 Plus full specs and reviews as of Oct 2021. Buy it here! 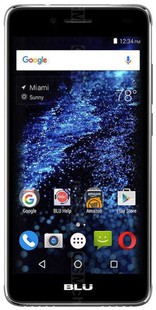 Blu Advance A5 Plus Specifications: