Asus has been in the mobile industry for not as long as other manufacturers. But they do have gained access to the market pretty well. All thanks to the impressive set of handsets they have released over the short span. Named as Zenfone, Asus has coined this term for their mobile phones in the market. And this Zenfone 3 is one of their most popular handsets. Why is it so popular? All because it offers an impressive set of the specification at not so expensive price tag. Let’s talk about the Asus Zenfone 3 specifications.

The internals includes 3GB RAM, 32GB storage, which can be expandable via microSD card slot. A 5.2-inches display embraces the device with full HD resolution. The camera package includes the 16MP rear camera and an 8MP front-facing camera. Powered by a Qualcomm Snapdragon 625 Octa-core processor, which clocks at 2.0 GHz. There is a battery capacity of 2650 mAh, which is claimed to last a day at least.

The Asus Zenfone 3 is the latest addition to the impressive product line up of Asus. The price of the device in India starts from INR 13,999. Color choices of the device include Black, Gold, and White.  The Zenfone 3 looks awesome but comes at a price.

Under the hood, this latest Asus smartphone flaunts an Octa-core processor clocked at 2GHz which sits on a Qualcomm Snapdragon 625 MSM8953 chipset. This is clubbed with a 3GB RAM that enables users to open multiple apps at the same time. The Octa-core processor ensures that things function smoothly and promises the users a lag-less Android experience. It boots on Google's recent Android v6.0 (Marshmallow) OS along with the Zen UI on its top. In the graphics area, the device supported with an Adreno 506 GPU.

In terms of imaging, the Asus Zenfone 3 comes with a 16MP Autofocus camera at the back with dual-LED flash and comes with features like Phase Detection autofocus, Laser autofocus, Exposure compensation, ISO control, colour-correction RGB sensor, Digital image stabilization etc for delivering crisp and clear images. It comes with an 8MP front-facing shooter which features LED flash option to output beautiful selfies in dark areas, the dual-tone LED flash is used to snap detailed images and shoot videos. As well the front-facing shooter is a paired with a wide 85-degree angle view, which is useful for making high-end video telephony.

The smartphone features a 5.2-inch FHD multi-touch display and uses IPS LCD technology.  The screen resolution is 1080 x 1920 pixels and generates a pixel density of 424 ppi and is capable of providing rich graphics. It also comes with a fingerprint sensor for added security. The display  is combined with awesome viewing angles that deliver vibrant  and crisp colours. On the front and back the Asus Zenfone 3 sports a 2.5D glass, along with a rounded aluminium chassis adorning the corners. In the front, it features a physical home button making it a nice-looking device. On the back, the device features a spun-metal finish which is clubbed with the glass to create a rich feel. The smartphone as well ships with a sandblasted metal chassis around it.

On the storage ground, it features an internal storage of 32GB which is further upgradeable up to 128GB using a microSD card. This helps the user to accommodate ample files and pictures without running short of memory space.

The device is juiced by a non-replaceable Li-Ion 2,650 mAh unit that keeps the handset up for a whole day.

With the launch of Zenfone 3, Asus has, at last, managed to move away from its bulky design style and has adopted premium and sleek looks. It has as well packed it up with a strong configuration, latest OS, and quick charging support. The Asus Zenfone 3, in fact, looks like a desirable handset. 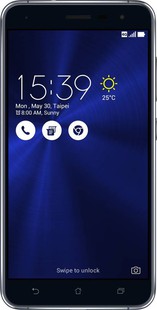