Taiwanese technology company Asus has announced its new mobile Asus Z1 Titan recently. With its Asus Z2 Poseidon already gaining the lion’s share of attention, the Z1 Titan also making some noise with its high-end features. The Asus Z1 Titan release date in India is expected to be in April. Let’s go into the Asus Z1 Titan specifications details.

The Asus Z1 Titan is powered by a Qualcomm Snapdragon 830 SoC Quad-core processor. Running on Android’s latest version Nougat, the processor comes with the speed of 2.2GHz. Also, the Adreno 530 GPU makes the Asus Z1 Titan a splendid platform for heavy gaming.

The Asus Z1 Titan comes with a 16MP primary camera and a 5MP front camera. Also, the primary camera comes with a dual-color LED flash and other features like Touch to focus, Autofocus, Geo-tagging, Panorama, Digital Zoom, and Face Detection. The video recording quality can go up to 4K @ 30fps.

The Asus Z1 Titan packs a non-removable Li-ion battery with the capacity of 3500 mAh. The company claims that with a full charge, the battery can last up to 12 hours of 3G talk time. For this price, there are other companies which offer a better battery, but considering Asus’ processor performance and its display, the 3500mAh is a decent bet.

The Asus Z1 Titan comes with a 5.5-inch IPS LCD display which has the 2K resolution (2560x1440p). The capacitive multi-touch screen has the pixel density of 534 ppi. This is the best display anybody can offer at this price range. The Fingerprint identity sensor is rear-mounted.

Also, the Z2 Poseidon features an Accelerometer, a Proximity Sensor, a Compass, and a Gyro Sensor. A 6GB RAM allows you to perform multi-tasking at its best, including the heavily built apps, games, and even Virtual Reality at a time. The phone comes with a dual-SIM slot and also supports Bluetooth 4.0. The Asus Z1 Titan price in India Rs 29999.

With this price and these features, the Asus Z1 Titan is surely going into the hands of gaming lovers and Asus aficionados. However, mobiles in the same price range, like Moto X Force and Gionee A1 Plus also proved to be good. 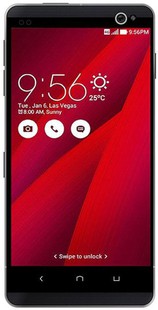