Archos is a consumer electronics manufacturer headquartered in France. Archos makes portable media players as well as portable data storage gadgets. The company of-late, has started making smartphones and tablets. Archos has also produced gadgets for other firms. The Archos 50 Graphite is the latest launch from the house of Archos. The price of the device in India starts from Rs.9,999.

As far as hardware is concerned, this latest Archos device has a Quad-core processor that is clocking at a speed of 1.5GHz and is seated on the chipset of MediaTek MT6737. This along with 1GB RAM can handles multi-tasking and also gaming needs. Apart from this, a Graphics engine of Mali-T720MP2 addresses the graphical needs of the device. In terms of software, the Android phone sails on Android V7.0 (Nougat) operating system.

To address photography and videography needs, the handset is armed with dual cameras at the rear - 13MP + 2MP which snaps nice pictures and shoots full HD 1,080p videos. For selfie crazy folks, there is a 5MP front facing shooter is available which outputs pretty nice pictures. You can also use the selfie camera for video telephony comfortably. The camera also comes with features like Geo-tagging, touch focus, face detection, HDR, panorama, Autofocus, LED flash.The camera also enables 1080P videos at a speed of 30fps.The LED flash feature in the camera supports you to shoot images even in dark light areas and still deliver pictures with good details.

The Archos 50 Graphite features a nice 5-inch IPS LCD HD display, which comes with Capacitive Multitouch display feature. The screen size is really decent and delivers nice quality experience while reading, browsing the internet, and watching videos. As compared to normal LCD displays, the display sharpness is superior in IPS LCD technology, which outputs lively images, and also shows off more vivid colours. The device has a screen resolution of 720 x 1280 pixels which delivers a pixel density of 294 PPI. To enhance the safety of the handset there is a fingerprint sensor at the rear.

In terms of storage, the device comes with a 16GB memory unit. The storage is further upgradeable up to 256GB using a microSD card or OTG cable. You can store media files and apps comfortably, no need to worry about memory space.

The device derives its stamina from a Li-ion 2,400mAh unit, which keeps the entertainment running for more hours.

Simply put Archos 50 Graphite is a device with marvellous cameras.The device is an awesome choice for shutterbugs who wish to capture nice quality pictures all the time. The device facilitates the usage of OTG cable and the rear-mounted fingerprint sensor also responds quickly. But, a large display in the device would need large size battery, which in fact looks like a major weakness of this handset.

Archos 50 Graphite full specs and reviews as of Sep 2020. Buy it here! 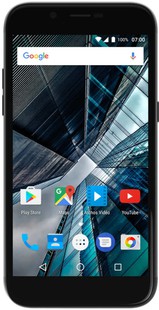