Apple iPhone 8 Plus price in India: Rs 69,999 (MRP) Check above store links for updated price of iPhone 8 Plus

Apple refreshes its line-up every year and in late 2017, the Cupertino giant introduced iPhone 8 Plus, which is a successor to the iPhone 7 Plus. Of course, it was the tenth anniversary of Apple last year, which is why all the limelight of this Plus variant was taken by iPhone X. But if by any chance you are not buying an iPhone X and looking for reasons to buy iPhone 8 Plus. Then, this expert review based on Apple iPhone 8 Plus specifications might prove helpful to you. Let’s dive into the details.

Apple brought back the glass design, the implementation is better than previous models. There is so much to love about the design of the iPhone 8 Plus. Despite many would say that there is no significant change. The point of good design is that it needs refinement, not a drastic change. The glass is claimed to be durable. Rated IP67, the precision-engineered body is waterproof and dust resistant. Talking about the display, it sports a 5.5-inches Retina HD display which has a full HD resolution.

Every year Apple introduced a new chipset and they try to name their baby. This time around their chipset is called Bionic. The A11 Chip comes with a 64-bit architecture, neural engine, and has a separate embedded graphics processor called M11. The performance is up to 70% faster than A10 Fusion chip on four efficiency chip, whereas 25% faster on two performance cores.

Over the years of its presence in the industry, iPhone has gained popularity as a device which can capture amazing captures. Whether it's about landscape or portrait photography, iPhone users have enjoyed capturing their lifestyle. And with an introduction of the new sensor, Apple has improved the camera hardware. It should technically handle photography requirements better than the previous model. The dual 12MP rear camera setup really up to the quality from its predecessor as claimed by the brand.

Apple has introduced wireless charging on this generation of iPhone. It is the first time, an Apple iPhone sporting this feature. They might be late to the party, but at least they have arrived. Apple claims that they have improved the battery life on this iteration of iPhone.

Why should I buy Apple iPhone 8 Plus in India?

The primary reason why anyone buys an Apple device is reliability, durability, and premium feel. Apple has released their best iPhone yet in the form of iPhone 8 Plus. If you are due for an upgrade, then, this is an iPhone you might want to get your hands on.

Apple iPhone 8 Plus full specs and reviews as of Dec 2022. Buy it here! 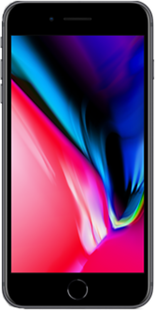