Apple the name itself pronounces class and iPhone 5s stands up to the reputation that Apple has managed to create for itself. It has a 8 megapixel rear camera and 1.2 mp front camera. It presently comes along with Ios 7 upgradable to iOS 9.3.3 and also has a planned upgrade to Ios 10. It comes in three variants depending on the storage capacity you choose. It is powered by a 1560mAh Li-Po battery. It is priced at 20489 INR.

One of the major negatives that apple carries for its customers is that it is highly priced. You might get the same features at a much lesser price from other brands but then again due to its performance Apple has created a niche for itself in the market.

If you swear by Apple or need a phone that will give you a long lasting performance then you are in for the right phone.

When Apple came out with the 5s it had left a lot of people in awe of its design. Apple had maintained the same stoic look about the phone but had made it slim, sleek, a little big and more elegant. It comes in three colours: Space Grey, Silver, and Gold. It has the signature home button in the middle of the lower bezel and the Apple logo takes its home position in the center on the back of the phone. The upper bezel in the back houses the camera in the left corner along with the LED flash and the model details are im-printed just above the lower bezel in the back.

iPhone 5s comes with a 4.o inches display with a resolution of 640 x 1136 pixels along with pixel density of 326 ppi. It has a capacitive touchscreen with a display type of LED-backlit IPS LCD. It supports multi touch and the screen to body percentage stands at 60.8%.

Apple has provided this model with an 8mp rear camera and a 1.2 mp front camera. It supports video recording through [email protected], [email protected] and supports many camera features such as the Autofocus, Touch focus, Geo-tagging, Face/smile detection, HDR (photo/panorama).It might not have a high definition camera but Apple photos always stands out on its own in quality.

Apple runs this on 2 (Dual Core) processor with a chipset of Apple A7. It has a frequency of 1.3 GHz with a GPU of PowerVR G6430 (quad-core graphics). This is a powerful processor on its own and has the phone running smoothly under heavy usage.

It comes with sensors such as Fingerprint, accelerometer, gyro, proximity and compass.

If you are looking for a long lasting durable phone with design, quality and display you are in for the right one. You can have a better look at its features here  . You can also compare with many other companies that produce phones at the same range such as HTC, Samsung  and Xiaomi.

Apple iPhone 5s full specs and reviews as of Feb 2023. Buy it here! 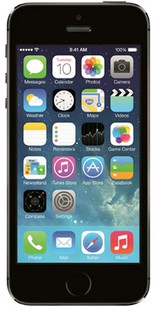