The camera offered by the phone is not good. It offers only 8 MP rear and 0.3 MP front camera which is quite less as compared to the other phones offered within such range.

It is a mobile with a trustworthy tag of APPLE. All the negative aspects of the phone are hidden beneath the tag. So if you would like to go for a phone with astonishing features without worrying of one or more low-quality features, check out for this one.

The Apple iPhone 4S 8GB mobile works on GSM/HSPA/CDMA/EVDO type of network. It has a single micro SIM slot. It has an alert type such as vibration, proprietary ringtones. A 3.55 mm jack with active noise cancellation and the dedicated mic is inserted in the. The dimensions measure 115.2 x 58.6 x 9.3 mm and the phone weighs 140 grams.

The Apple iPhone 4S 8GB specifications include quite interesting display features. The screen resolution is 640x960 pixels. It also gives a LED-backlit IPS LCD touchscreen with 330 PPI of pixel density. The display size of the mobile phone is 3.5 inches. It also specifies screen to body percentage as 54%. Multi-touch display features are also available with this phone.

The Apple iPhone 4S 8GB camera gives a camera of 8 mega pixel rear camera and a front selfie camera of 0.3 mega pixel. Video recording of 1080p @30 frames per second is available with the phone. Other features include geo-tagging, face detection, autofocus, panorama, touch to focus, and HDR. Thus, the camera features offered by it as a whole are attractive.

The Apple iPhone 4S 8GB is powered by a Dual-Core Apple A5 chipset built on cortex-A9 architecture. It has a frequency clocked at 1.0 GHZ. This phone uses iOS 5 upgradable to iOS 9.3.3 platform for its functioning. A GPU of Power VR SGX543MP2 version is given by the phone.

This phone has sensors such as the accelerometer, gyroscope, proximity and compass sensors.

Apple iPhone 4S 8GB specs are worth grabbing your attention. It is packed up with all the features you require for a smooth functioning of the phone. 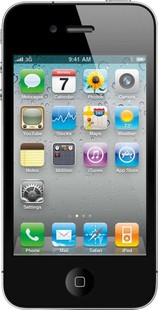