Alcatel was established in 2004 as a joint venture between Alcatel-Lucent of France and TCL Communication of China. The company focused on fixed mobile and converged networking hardware, IP technologies, software and services, with operations in more than 130 countries.

The company is the manufacturer of the One Touch mobile and tablet series.

Alcatel OneTouch is an international mobile technology brand which designs, develops, and markets globally a growing range of mobile and internet devices. The company is known for its OneTouch range of Android Smartphones.

The Pixi 4 comes with a 13MP primary camera and a 5MP front camera. Also, the primary camera comes with LED Flash, Autofocus, Voice capture, HDR, Face Detection. The camera can shoot video up to 1920 x1080 @ 30 fps. The phone takes photos and videos which look great and have clarity.

The Pixi 4 packs a non-removable Li-Ion battery with the capacity of 5000 mAh. The company claims that with a full charge, the battery can last up to 22 hours.

The battery life is mind blowing for a phone like this.

The Pixi 4 comes with a 5.5-inch IPS LCD display, which has a resolution of 720x1280 pixels. The capacitive multi- touch screen has a pixel density of 267 ppi. This is the best display anybody can offer at this price range. The picture quality is amazing and very vibrant and beautiful for a phone like this.

The Pixi 4 comes with 1GB RAM and 8GB internal memory. A microSD card of 32GB (max capacity for SD card) can be used.

Also, the Pixi 4 features an accelerometer, proximity sensor, and compass. A 1GB RAM unit for your multitasking needs is low and would also make the phone lag. The phone comes with a dual-SIM slot and also supports Bluetooth 4.0. The Pixi 4 prices in at Rs 5,399 in India.

The phone is a very average Smartphone and has some minus point; however; the plus points over weighs them. The phone is great for its price and has a great battery life. If you are looking for a low priced Smartphone, you can certainly buy the Alcatel Pixi 4 Plus Power.

Alcatel Pixi 4 Plus Power full specs and reviews as of Dec 2022. Buy it here! 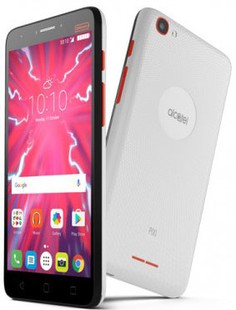