Alcatel was established in 2004 as a joint venture in China. They are the manufacturers of OneTouch phones and tablets. The Alcatel OneTouch Pop Star device is released into the Alcatel’s Pop range of smartphones in September 2015 and is up against competition of some of the phones in the low budget segment with higher specs. Alcatel OneTouch Pop star review clearly depicts its features, and specifications for a better view of the phone. The phone also features 3.5mm music jack for great sound quality.

Describing the Alcatel OneTouch Pop Star specifications, the phone has 1 GHz Quad-core processor with Media Tek MT6580 chipset. The Gaming processor unit is Mali-T720 MP2 and it comes with 1GB RAM. It runs on Android 5.1 Lollipop. The phone processor lets you have a smooth phone functioning and performance. One also gets an Accelerometer and proximity sensor as an add-on.

As far as the Alcatel Onetouch Pop Star camera review is done, the phone has an 8-MegaPixel primary camera and a 5-MegaPixel front shooter, well enough for video calls and selfies. Alcatel OneTouch Pop star camera is quite satisfactory at this price with LED flash, Auto Focus, and Geo-Tagging features. Video recording at [email protected] is also possible.

Alcatel OneTouch Pop Star display is 5-inch unit, with HD resolution that is good enough of viewing videos or playing games. The phone couture’s 141x 71.5x 8.6 mm body size. The phone comes with a 5-inch touchscreen display with a resolution of 720 pixels by 1280 pixels. The screen features multi-touch function up to 5 fingers. The display covers 16M colors for better picture quality.

Alcatel OneTouch Pop Star provides you with 8 GB of internal space to save all your memories. With this, the phone facilitates MicroSD slot with which you can expand your phone memory up to 32GB

The Alcatel OneTouch Pop Star price in India is expected to be Rs4,999. This would be a part of the low budget phone list in the market with all the satisfactory average features. Alcatel OneTouch Pop Star price is seen to be reasonable as per the features it offers. The phone seems to be at par with its competitors making it a tough choice to pick. 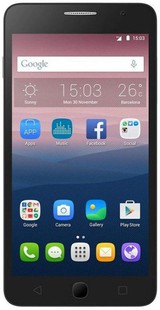