Alcatel of France came up with phones when it collaborated with TCL of China. From then on it has been creating phones and has been known for its OneTouch range of phones. The Alcatel Idol 4S phone has an amazing resolution and supports a very good multi-touch.

The Alcatel Idol 4S price in India is not yet known so whether the phone’s a good bargain or not is still undecided. The internal storage could have been a little higher. Whether it has a fingerprint sensor or not is also not yet known.

The Alcatel Idol 4S specifications seem to be an impressive one but whether it suits the users will be known once it’s tested and the features are known better.

The design has a royal and elegant touch to it and makes the display play a major role. The display takes up the entire front of the phone with a minimal upper a lower bezel. The upper bezel has the audio speaker and the front camera and sensor on its right. The rear camera is placed a little below the upper bezel in the back and the LED flash is present on its right. The entire phone is lined with a metallic brim. The volume rocker is placed on the right side of the brim.

The Alcatel Idol 4S display measures at 5.5 inches and has a striking screen resolution of 1440 x 2560 pixels (~534 ppi pixel density). The screen to body percentage is measured at 71.9%. The touchscreen itself is AMOLED capacitive and it also supports multi touch up to 10 fingers.

16MP for the rear camera and 8MP for the front camera sounds like a good deal. The video recording clarity is achieved with the help of [email protected] The other Alcatel Idol 4S camera features include phase detection autofocus, dual-LED (dual tone) flash, Geo-tagging, touch focus, face detection, panorama and HDR.

It comes with an internal storage of 32GB which can be expanded up to 256GB using a microSD card in the SIM 2 slot.

The other Alcatel Idol 4S features include fast charging feature. It is available in Gold, Dark Grey, Rose Gold and Metal Silver.

It is a powerfully packed phone with awesome features. Compare it with phones from Apple , HTC  and Xiaomi once the Alcatel Idol 4S price is released.

Alcatel Idol 4S full specs and reviews as of May 2022. Buy it here! 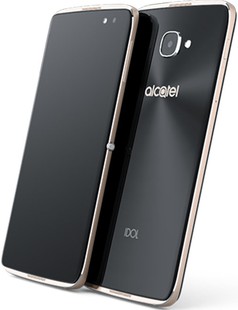